HomeEntertainmentExclusive-U.S. and Brazil lawmakers seek to cooperate on investigation of Brasilia riots 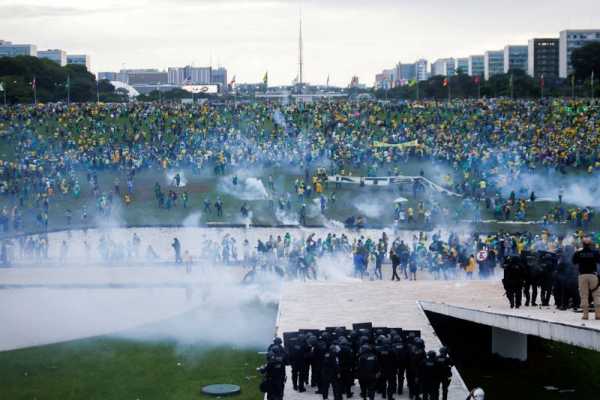 Exclusive-U.S. and Brazil lawmakers seek to cooperate on investigation of Brasilia riots

WASHINGTON/BRASILIA (Reuters) -U.S. and Brazilian lawmakers are looking for ways to cooperate on an investigation into violent protests that rampaged through Brasilia this weekend, sharing lessons from inquiries into the attack on the U.S. Capitol, people familiar with the talks said.

The initial discussions occurred as more than 70 lawmakers in the two countries signed a joint statement denouncing “anti-democratic” forces trying to overturn recent elections in their nations with political violence.

U.S. Representative Bennie Thompson, chairman of the recently dissolved House committee that investigated the Jan. 6, 2021, attack on the U.S. Capitol, is one lawmaker whose office is discussing collaboration, according to one of the sources.

“I am extremely proud of the January 6 Select Committee’s work and final report. If (it) serves as a model for similar investigations, I will help out in anyway possible,” Thompson said in a written statement.

Brazil’s Senate President Rodrigo Pacheco has also discussed the idea of such an exchange with the top U.S. diplomat in Brasilia, said another person familiar with the conversation.

The source, who is close to Pacheco, said the U.S. embassy’s chargé d’affaires, Douglas Koneff, was receptive to the idea of sharing know-how from the investigation of then-President Donald Trump’s supporters who attacked the Capitol in a failed attempt to stop Congress from certifying Joe Biden’s election win.

Pacheco’s office and the U.S. embassy in Brasilia did not immediately respond to requests for comment.

U.S. Secretary of State Antony Blinken said on Wednesday that Washington had not received any specific requests from Brazil regarding the recent violence in Brasilia, but it would respond “expeditiously” if and when a request arrives.

Separately, a group of 74 federal lawmakers in the United States and Brazil released a joint statement on Wednesday condemning the political violence in Brasilia and Washington that came two years and two days apart.

The statement, signed mainly by progressive lawmakers in both countries, was articulated by the Washington Brazil Office, a group promoting bilateral dialogue in defense of human rights and sustainable development.

“It is no secret that ultra-right agitators in Brazil and the United States are coordinating efforts,” they wrote, citing ties between associates of Trump and Bolsonaro. “Just as far right extremists are coordinating their efforts to undermine democracy, we must stand united in our efforts to protect it.”

The Jan. 6 committee’s final report, released last month, said Trump should face criminal charges for inciting the deadly riot. The report listed 17 specific findings, discussed the legal implications of actions by the former president and some of his associates and included criminal referrals of Trump and other individuals to the Justice Department.